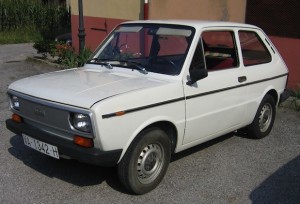 Someone shared this link on Facebook last week, about how bees will warn other bees of any danger lurking around. It made me think of when I was a kid riding on my parents’ car, an old white 133 which should have been retired way before they bought it. Actually, I should be kinder to it, as it took us to and from Valladolid on many occasions, my mom at the wheel, my dad the human GPS. He never got a driver’s license, but even in the United States he can get to places easier than I can. Both my mom and I suck at driving in either country. But hey, at least we can drive. Sort of.

I remember many times when we were going someplace and drivers coming from the opposite direction would flash their headlights at us to signal trouble ahead: usually the police, but it could also mean an accident or a traffic jam. I haven’t noticed people doing that here and I never pay attention anymore when I’m in Bibao.

We had an accident one year on our way to Cogeces del Monte. My grandpa had travelled by train to Ortuella to pay us a visit and then we all drove back to take him home. I feel bad now when I think about him. My sister and I never really gave him a chance. He was so far removed from our lives, so different from us. I remember him always being old. He’d bring us a rubber ball every single time he came to visit, bouncy, and we’d look at it and kind of laugh a little. My dad called him Father and my aunt Mr. Mariano most of the time. And they’d always use the formal “you” to address him. He was as hard-headed as they come.

We’d been driving for 4 or 5 hours and were getting close to our destination. A few more kilometers to go on this rural, winding road. Mr. Mariano was on the copilot seat, and my dad between my sister and I in the back. I think they used seat belts in the front, but definitely not in the back. There was this bend on the road and my mom took it too wide and suddenly we were rolling down the hill and landed on a wheat field. Nobody was hurt except my dad, and he only got a fat lip. He had put his arms around my sister and I so he couldn’t stop himself from hitting the front seat.

My mom said later that had the road been a little wider we would have simply turned the car around and that’d have been it. True.