You are probable as shocked as I was when I learned that Kinder Surprised Chocolate Eggs (from now on KSCE in this blog post, to save time and key strokes) had been finally legalized in the US after years of prohibition. Hey, at least you’re getting it from me and not from your 9-year old daughter, which was quite embarrassing. In my defense, growing up in Europe where KSCEs are sold in all the coffee shops and candy stores, I never even contemplated an alternative universe banning these little bundles of sweetness that have made thousands of children happy for the last few decades.

I don’t know if it was the shock or my close-mindedness, but I couldn’t, for the life of me, wrap my head around the news. What do you mean legalized? Doesn’t that imply they were illegal at some point? I just couldn’t figure out a reason why the US would place a ban on KSCE sales. Then, I ran into this other piece from the International Business Times, which talks a little bit more in depth about the ban and left me confused again, as it is dated June 2014 but it states that the ban remains – the previous article was from 2013. Lucky for you, nothing escapes my Google researching skills, and after a couple of minutes of additional surfing, I realized that Kinder Eggs are still banned. It is Choco Treasure Eggs that have managed to avoid the U.S. ban thanks to a new idiot-proof design. 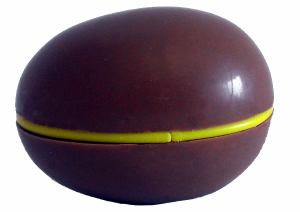 And don’t get me wrong, I’m not talking about the kids being idiots. Have you ever met a kid who wanted a KSCE because he was craving chocolate? (Sorry, rhetorical question for people who’ve have traveled abroad). In any case, and for your information, kids don’t give a crap about the chocolate, they just want to rip the egg apart and play with whatever toy is tucked inside. They are not called Kinder Surprise for nothing, surprise!

I can understand safeguarding our kids’ well being, but I’m pretty sure that the chances of a 9-old shooting her instructor with an Uzi, or a 5-year old accidentally killed by a gunshot at home, or an ISU professor almost ripping his nuts off with an unholstered gun inside a classroom are way higher than a kid choking on a toy-filled chocolate egg. But hey, what do I know? I’m just one of those Europeans with European views on gun control.

So yeah, let’s concentrate on banning the smuggling of hollow candy into the land of the free while teaching our babies to hold automatic assault rifles so they can go shopping at Kroger.

2 thoughts on “Toy-filled chocolate eggs now legal in the US. YAY!”