By now, you all know how much I love Boise’s fronton, what a beautiful and special place it has been for me and for the hundreds of people who have played or enjoyed watching the games since it was built a century ago.

I’ve written before about the place and how it makes me feel, as have done others in the community, like Mark Bieter, who wrote a beautiful piece a few months ago entitled My Favorite Room.

Today, the Boise Weekly publised a very nice article to commemorate 100 years of pala at the Anduiza fronton. You can find the original article here, but I’ve reproduced it below for your convenience.

A Beautiful Room: 100 years of pala at the Anduiza fronton

by By Jessica Murri 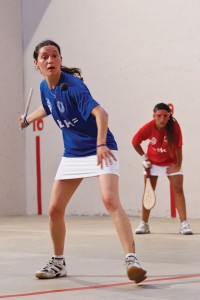 Courtesy of the Boise Weekly

Standing in the middle of the Basque Block, you’d never know it’s there. But within the walls of the historic Anduiza Hotel, there is a 3,400-square-foot room with a 50-foot-high ceiling. Windows run along the tops of the walls, filtering in natural light on old, exposed wood beams along the roof.

The enormous white walls are speckled with black skids from a rubbery ball–or 100 years worth of rubbery balls, smacked into the surface during the intense, high-energy game of pala, aka pelota, aka Basque racquetball.

It’s played with wooden paddles that look like overgrown, flattened spoons, and a ball not much larger than a golfball. Four people compete in pairs on the court, which is called a fronton. Boise’s fronton is the oldest still in use in the United States.

Despite the court being 100 years old this year, “it’s not just a historical thing for people to come look at,” said Henar Chico, who has spent six years playing the game. “No, it gets used every single day.”

For Chico, pala is more than a sport; it’s a connection to her homeland, a tool to bond with her kids and a way to strengthen herself as a person. She moved from the Basque Country in her early 20s when she married an American who lived in Boise. She moved having no idea of the Basque community here.

“When I lived in the Basque Country, I didn’t speak Basque, I didn’t dance, I didn’t play any sports,” Chico said.

It wasn’t until her kids were born that she started thinking about what it means to be Basque. She learned the language and studied the culture. Then, a year after her marriage ended, she found pala.

She used it as an opportunity to meet other Basque women and get herself back out there after her divorce. Then, she got her son on the court, who’s 10 now. They started playing as partners in the Women’s B League and recently made it all the way to the finals.

“We lost by one point and he cried,” Chico said. “Every time he loses, he cries out of frustration. It’s easy to go, you know, ‘It’s just a game,’ but now that I play pala, and I can feel [that defeat] inside, I can tell him that I know. I know what it feels like.”

“I mean, yeah, I like going and beating the ball and hearing the sound it makes, but it’s way more than that,” Chico said. “I’m doing something thousands of miles away, that despite living in my country, the Basque Country, I would have never done.”

Among the 25 or 30 Basque women who give up one night of their week in fall and spring to play pala, there’s the pale-skinned, very blonde Sarah Ober.

Once she played in a tournament against a visiting team and, “I was quite clearly the only non-Basque to play, and some guy was sitting in the audience and he was Basque and he was speaking to somebody in Basque, going through everybody’s last names and he gets to mine and he goes, ‘Ober? Aleman!’ And I was like, ‘What does that mean?’ And they said, ‘That’s Spanish for German.'”

Ober, who just finished a bachelor’s degree in German, who spent some time living in Germany, who doesn’t have a drop of Basque blood in her, loves pala. She was the first non-Basque player to join the women’s league when it started in 2007.

“I was a little hesitant about it because the Basque community is very tight-knit, so to come in from the outside was intimidating, but everybody was super welcoming,” she said.

Now there’s a handful of non-Basques who play every week and compete in tournaments.

She grew up in Boise, took a field trip to the Basque Center in elementary school like every other kid in the Boise School District, “but I didn’t know anything about it. It’s just here and if you’re not engaged in it, you don’t have any idea.”

Now, she tours the fronton court every Wednesday of the fall and spring, spending 45 minutes playing her game, and the rest of the evening sipping beer and eating croquetas from Bar Gernika, chatting with the other women.

And like Chico, she’s learned a little more about Basque culture through pala.

“I can say ‘hello’ in Basque, I think. And I can count to eight,” Ober said, laughing. “I understand what some of the festivals are, what the customs and traditions are. Like, the festival of San Inazio isn’t just an excuse to come down and drink kalimotxos until you can’t see straight.”

But pala is hard. Ober has never come in first place, despite playing for the past seven years, tearing a couple of ligaments in her knee and spending at least $700 on member dues to use the court. The closest she has come is second, three years ago.

“We were playing this one girl in the finals who is super good. I kind of quiver every time I have to play against her. We only lost by like three points and we got a bottle of wine at the end of it and I still have that bottle of wine. I refuse to open it,” Ober said. “Unless I get first place, then I will drink that second-place bottle of wine, and it will taste like victory.”

An entire chapter of the recent book, Becoming Basque: Ethnic Heritage on Boise’s Grove Street, is devoted to the fronton court and history of the game in Boise. To commemorate it, the Basque Museum also set up an exhibit on the court.

Basque Museum and Culture Center Director Patty Miller said an anonymous donation will help keep the fronton around for another century. The money will go to repainting the court, restoring its windows and installing more lighting.

Boise Mayor Dave Bieter’s brother, Mark, blogged about the fronton in 2012, in an article called “My Favorite Room.” In it, he said people use the fronton almost every day. In fact, it’s probably used more now than when it was first built in 1914.

“It’s a treasure, and I hope it stands for another hundred years,” Bieter wrote.