“GURE ESKU DAGO” (It’s in our hands), a movement in favor of the right to decide in the Basque Country, will be in Boise for Jaialdi and would like to invite you to attend their conference on July 30th at the Grove Hotel. During the event, Boise’s mayor Dave Bieter will present Ibarretxe’s new book, The Basque Experience: constructing Sustainable Human Development. Juan Jose Ibarretxe is the former President of the Basque Country. Ibarretxe (Agirre Center) will be a main speaker, along with Jon Camio (GURE ESKU DAGO), and Dr. Joshua Fisher (Columbia University). 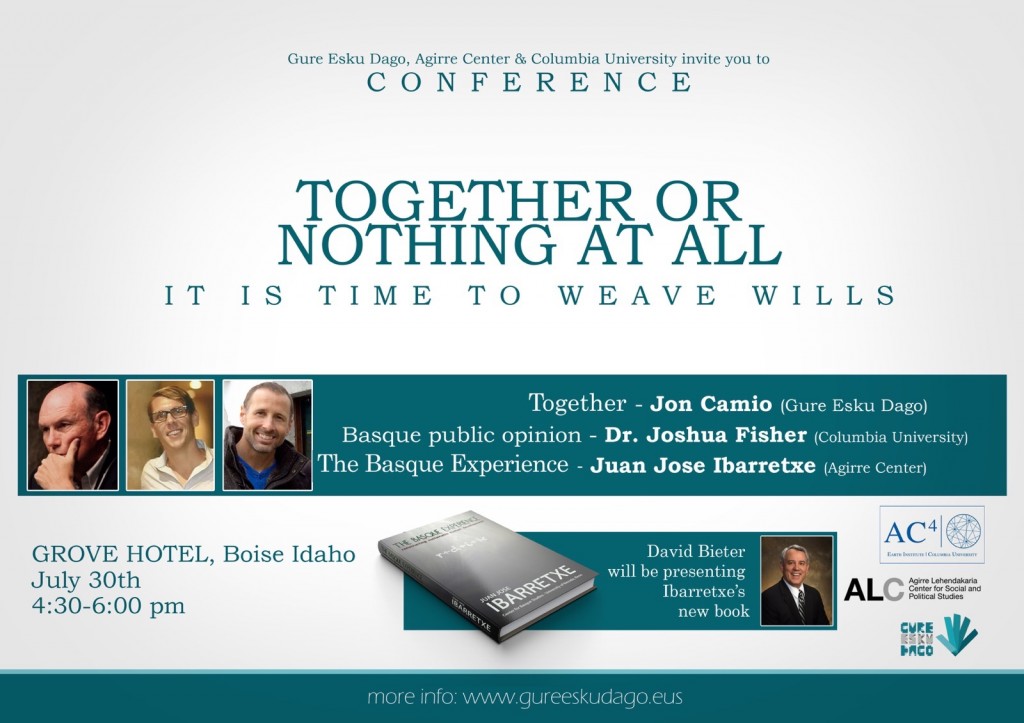 The event will be hosted by Boise’s Mayor Dave Bieter. Representatives of Pete Cenarrusa Foundation and Xabier Irujo (Center for Basque Studies, University of Nevada) will also take part in the conference.

During the first part of this meeting Juan Jose Ibarretxe will present his research on the extraordinary transformation of the Basque Country from the recovery of self-government in the eighties up to now, and specifically in the period 1998/2008, in three relevant but traditionally unrelated fields: economics, social balance and peacemaking.

On Saturday and Sunday, CenturyLink Arena will be hosting a variety of vendors, including one manned by the “GURE ESKU DAGO” organization. Stop by and get to know them better.

The group is a citizens initiative that began on June 8, 2013. Their main goal is to achieve citizen support for the Basques’ right to decide. The movement is all-inclusive, as it extends to everybody its invitation to participate.

Last year’s big activity was the human chain. This year the organized a “patchwork”; a patchwork which was sewn together on the 21st of June into a massive ballot box.