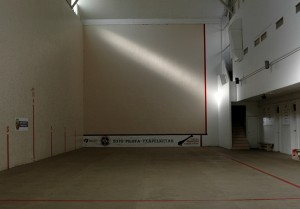 Did you know that the 100th year anniversary of the Anduiza Fronton Building is fast approaching?

A century might sound like nothing special for most Europeans (for example my hometown, Bilbao, is over 700 years old), but it is quite rare here in the West. Located in the middle of downtown Boise’s Basque Block, this building holds a special meaning for the city’s Basque community because it houses Boise’s only fronton, a three-walled court used as playing area for pelota and pala. The Anduiza Building was built as a boarding house for sheepherders by the Anduiza family in 1914, and the first pelota game was played a couple of years later.

Recently, our fronton’s milestone sparked some interest for the Boise Weekly, where you can find reporter Jessica Murri’s wonderful article: A Beautiful Room: 100 years of pala at the Anduiza fronton. Before that, the Idaho Statesman ran an article titled Anduiza Fronton, a Boise icon. Boise’s Mark Bieter also wrote a very nice and personal piece about the fronton in 2012, entitled My Favorite Room.

We think that a milestone such as this one deserves some attention and a big celebration, and we wanted to gather your input as to which would be the best way to do so. Please, take a second to choose one of the options below and let us know!